On the other hand,his arguments about lawyers cites statistics that I suspect come from Chamber of Commerce types, such as the cost of "litigation" on manufacturing. Know this: when it comes to regulation or litigation, no one, but no one, outspends corporate America on whatever it takes to protect their interests.

And so it goes, for each insight it seems, we have a pat conservative analysis. And so it is that Ferguson seems to cite problems and remedies that are all too "conservative", as in pro big business. Ferguson is not a no-nothing on social issues. Ferguson can't quite pull back from what seem to be quite pugilistic instincts in politics, a Thatcherite through and through, although Maggie and Ronnie are now long gone.

And so Ferguson ends the book by quoting President Obama's "you didn't build that" remarks in the same light as other conservative hacks: Obama is promoting the State always in caps for this crowd against "civil society". The great irony here, of course, is that Obama cut his teeth in civil society as a community organizer, and his instincts are amazingly centrist and conciliatory even though the center has moved far right and the Republicans lack anyone with whom he can conciliate. Also, in the context of what Obama said, there is no glorification of the State, only the recognition that the government does provide a crucial avenue for collective action.

In the end, I'd have to say this is more "bad Niall" than "good Niall" but still with flashes of insight that you wish more of. We can only hope that the good Niall comes back. Jul 28, Gregg rated it it was ok Shelves: financial-crisis , economics , stuff-i-m-not-qualified-to-read.

Our glory days are over; since we are no longer ascending, we're vulnerable to competition and the innovations of the East and Africa. The financial crisis had less to do with banks swapping mortgages and ripping off the homeowners. It had everything to do with the government choking the infrastructure with laws and deficit spending. Banks, it turns out, are less guilty for giving out loans to people they shouldn't have than the people themselves. By that logic, I guess we start locking up rubes at the county fair instead of the hucksters rigging the tilt-a-wheel.

He builds his arguments on empirical data which, even to a layman like myself, seems selective and unconvincing Adam Smith, for example, was much more suspicious of the mercantiles' motives and civic-mindedness than you'd deduce from the material pulled from him here.

One tiny example: Ferguson rolls out a long list of figures about Americans' lower rates of participation in civic, volunteer and charity organizations, and points to this reduced activism as proof of socioeconomic decline. Unmentioned, of course, is the decline in wages and benefits, and increase in working hours, that could well explain such a decline, though to Ferguson, corporations and employers are rarely as guilty of malfeasance as the government or community.

Another tiny example: If we allowed the markets, banks and financial institutions to operate according to the laws of Darwinism, we'd see better results. He writes that natural selection should result in healthy competition and "extinction" of the inferior, but "whereas evolution in biology takes place in a pitiless natural environment, evolution in finance occurs within a regulatory framework which is stupid enough to make a fragile system even more fragile. And an even teenier example: Ferguson's claims that businesses reporting low satisfaction with certain countries because of regulation and oversight is suspect to me.

Not that laws like Dodd-Frank are perfect or anything, but if they're annoyed about legislators attempting to make it tougher to downsize, boost profits and expect future bailouts, well, isn't that a good thing? In Ferguson's worldview, I think we're supposed to accept the notion that banks, businesses and corporations are greedy and predatory as an axiom. We just accept it as a given and operate around them somehow, and since the state can't possibly stop this sort of thing, it shouldn't even try.

When it comes to schools, I should point out, Ferguson admits no defeat in the face of human nature: education, as long as it's privatized, can do anything. 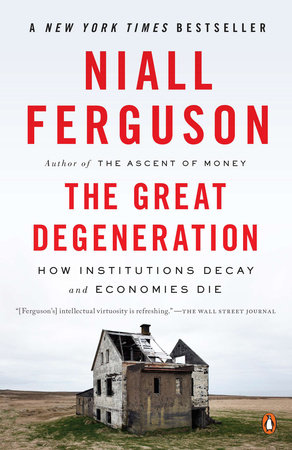 Ferguson devotes ten pages to this point, in which he says absolutely nothing new, although I did find it bewildering that a scholar so erudite however much I may disagree withies philosophy can misread PISA studies like the thousands of other numbskulls railing against public education.

On one page he calls for schools to be increasingly privately funded so that they can be "free to select pupils. I think But he lost me when he snapped that "if young people knew what was good for them, they would have voted for Paul Ryan. I am not John Galt. Note: If my poor words fail to convince, I'm not surprised. Feb 23, Blair rated it liked it Shelves: economics.

In summary, the degeneration of Western society is caused by strangling the economy with excess regulation, robbing the next generation with debt, undermining rule of law with lawyer hegemony, and delegating civic responsibility from society to the state. But how can we discuss degeneration without knowing what the goals of a society should be. He seems most upset when telling us how the West is no longer so much richer than other countries.

Is economic growth itself the only measure of our progress?

One gets that impression. Yet one of his major themes and the most original is about the decline in voluntary societies and clubs. We are told these societies were much more effective at delivering benefits to the poor than large government programs.


But they did not reach many people. I should also point out that this kind of activity is not a good personal profit maximizing strategy, suggesting that a preoccupation with material goods may be part of the problem. Much heat but little light is shed on the question of regulation.


Yes, excessive regulation can strangle initiative. The law should not be a detailed instruction manual on how to run your business. But how do we get the balance right? Sure, it is best to have simple rules with strong enforcement, but the devil is in the details. The most interesting idea is that common law is an evolutionary mechanism, while an imposed civil law is an attempt at Intelligent Design, which never works.

But as usual, in the end we are left hanging for a lack of practical solutions. The real reason is… the four themes of the book, again for unspecified reasons. Thanks for that. He reminds us that the social contract should not be only between citizens, but also between generations. Forget the sterile argument between austerity and stimulus; increasing debt is systematic theft from the future. And the real debt is much larger when you include the unfunded liabilities of welfare programs and defined benefit pensions.

Well, is debt not a zero-sum game?

If everyone is so deep in debt, then who are the creditors? Does China own the whole world, or do we simply owe it to ourselves? Also, I suggest this does not explain our low growth today while we are still on the receiving end of the intergenerational theft. We get a lot of analogies with the natural world from someone who has so little place for it in the decision making process. For example, he does allow that burning fossil fuels will lead to climate change. And maybe if it is disruptive enough there will be a meaningful policy response. Never mind that given the inertia of the climate system it will then be too late.

How about a hint as to how we should deal with this? Instead he dictates which technologies we should use. This is what passes for analysis. You would think he might at least suggest a carbon tax and let the market decide matters he knows little about. The common thread is that we are in trouble because we have fallen into a stationary state. Those who advocate such a thing for environmental reasons should consider if wasting resources on excessive regulation, inefficient government programs, a parasitic lawyer class and funneling all our wealth to the elite is the way to achieve it.

Have you experienced the difference between working in a growing organization and a static one? Shall we extend this to the whole society? Remember that no population growth means an aging population - ever more old people stealing the future from fewer young people. Then there is the small matter that the country that is growing the fastest is a totalitarian state with utter contempt for our liberal institutions.

Real world problems are hard. This book identifies some, but I wish it helped a little more with their solution. The saving grace is that the book is blessedly short, so your time investment is minimal if you choose to consider them. View 1 comment. Aug 26, Drtaxsacto rated it it was amazing. A lot of the reviews of this short book which is taken from a group of lectures seem to be grumpy about the conclusions or miss the argument. Ferguson is a great historian I loved the Ascent of Money for its breadth.

In a brief approach the book is about pages he describes the consequences of each of the declines. In a final chapter he raises some possible scenarios but throughout the book he offers ideas about what might be done.

It is not as some of the Good Reads reviewers have suggested, a fatalistic book. But the consequences of not addressing the declines are substantial. Jul 14, Matt Escott rated it did not like it Shelves: non-fiction , current-affairs. The Great Degeneration is not a hard or long read. Unfortunately, it's is also not a good read, as Ferguson never gets around to proving his point; the how or why our institutions in the West are failing. Ferguson focuses on four areas of our society: democracy, market capitalism, the rule of law, and civil society, and attempts to show how each of these institutions have greatly regressed, to the point where the West is now in stagnation.